The Elvis of the Senate

I’ve been reading a great book on John Quincy Adams.

I only bring Johnny boy up because I forgot that when he fainted in 1840 it was on the floor of the United States Senate in the arms of none other than the Senator from Kentucky, the indomitable Henry Clay dying soon after.

Just so you know, John Quincy Adams was the son of John Adams and the 6th President of the United States.

He was also the only president to go back into the House of Representatives after his term of office ended.

Mr Clay, the quintessential rock star of his time, along with the likes of Daniel Webster from Massachusetts were the famous duo who constructed the 1850 Compromise staving off Civil War for 11 more years.

I’m always amazed why Clay is not more mainstream. He’s one of the most fascinating, exciting Americans one could read about.

He was brilliant, saucy, irreverent and when word got out he was taking the floor to speak, the upstairs gallery of the Senate was packed with women who made skid marks to hear the sexy Senator from Kentucky. 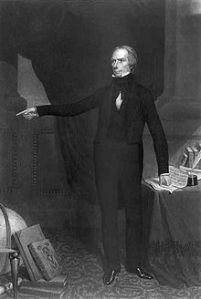 (women were only allowed on the upper decks if you will).

There’s a couple of great books on Clay: The Essential American by David and Jeanne Heidler and At The Edge of the Precipice by Robert Remini (one of my favorite writers) that tells the whole story of the 1850 Compromise that ultimately saved the union.

When you look at pictures of Henry Clay, portraits mostly – The Metropolitan Museum    has one in their permanent collection – you can see the fire in his eyes that seem to glare back at you from the canvass. 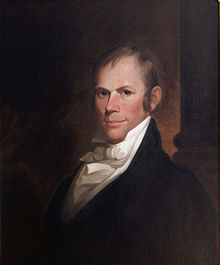 He was intense and recklessly brave standing up for all things threatening his country. Lincoln was a great fan of his calling him his beau ideal. The irony is not lost that he, like his idolized predecessor, also saved the union 15 years later.

Though he was loved he was equally hated, like any other politician. Andrew Jackson, our 7th President, loathed Clay actually blaming him for the premature death of his wife Raquel who died of a heart attack after reading an unpleasant account of herself in a northern newspaper. Jackson, convinced Clay was the culprit, despised him for the rest of his life.

Raquel’s first husband, believed dead, turned up one day making her a sensational bigamist which is the story that became public in the hopes of it thwarting Jackson’s political career. The poor woman, an avid Christian possessing a weak heart, couldn’t  withstand the slander.

Do I think Clay was behind it? Probably. It was never quite proven but he was certainly capable of it. All is fair in love and politics after all.

He was more than a little colorful in personality. A drinker, gambler, first class flirt despite a long and seemingly happy marriage that produced 11 children.

He was also hot as hell with legs the length of the Chesapeake. If I were around in those days I’d be on the look out for Mr. Clay for sure.

When I saw his hat displayed at the Smithsonian in Washington my heart started to pound.

Even from the great beyond the man’s a first class turn-on.

I think one of the reasons he resonates for me is that men like him no longer exist. When was the last time we had someone that dynamic to look to?

Wish I could say it was President Obama but frankly, he was a disappointment on so many levels.

Bill Clinton maybe? He doesn’t do much for me at least looks wise. I always found him too fat, though I’m told he exudes tons of sex appeal when you meet him. A girl I know said he oozes heat like a passing vent (her exact words).

Clay, on the other hand, seemed to have all the right components to float my boat where a man’s concerned; smart, confident, sentimental over his country.

I was asked once if I could be anywhere in history, where would it be, and without missing a beat said, in those hallowed halls of Congress listening to Henry Clay fight for the preservation of the Union of States in the year 1850.

Oh well, at least I can read about him, and so can you. I promise you won’t be disappointed or bored.

And for the record, when John Quincy died, Clay wept like a baby.

Got to love a man who along with being sexy and smart cries too. Did I mention, like Washington, he freed all of his slaves upon his death? A huge deal for an avid southerner in those lofty, antebellum days. Think Gone With The Wind before the war breaks out.

He was the first person to ever lie in state in the Rotunda of the United States Capitol.

Elvis, after 30 years of serving his country…

had finally left the building. 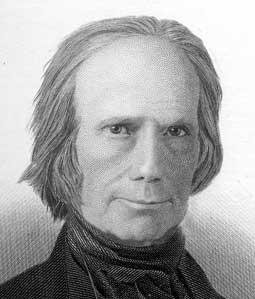 I'm just a girl who likes to write slightly on slant. I've had a career in fashion, dabbled in film and to be honest, I don't like talking about myself. Now my posts are another matter so I will let them speak for themselves. My eBooks, A New York Diary, Model Behavior: Friends For Life and Notes From A Working Cat can be found on Amazon.com. Thanks.
View all posts by Susannah Bianchi →
This entry was posted in Books, History, humor, Love, sex, Uncategorized, Women and men, writing and tagged 1850 Compromise, American History, Bill Clinton, great oratory, Henry Clay, John Quincy Adams by Harlow Giles Unger, men with sex appeal, The U.S. Senate, wooing women. Bookmark the permalink.

15 Responses to The Elvis of the Senate