When Late Is Great

I missed the boat for real the other day.

Had a job on Staten Island expected to meet a magazine crew on the ferry at 7:45. I thought it was 8:30, so when I got to the terminal, no one was there.

I emailed a friend also working that I’d simply take the next boat.

I wrote about the ferry recently (Poop Head Smith) saying how much I loved it, growing up having relatives on Staten Island we visited frequently, so life was imitating art when I found myself aboard her well worn planks.

Releasing myself from acute stupidity, I sat outside for the twenty-five minute sail across New York harbor. Five minutes hadn’t passed before I knew how lucky I was to be making the trip alone, free of the vapid vocabulary of my peers. Peace prevailed as seagulls dove overhead while the waves lapped against the sides.

Without much thought I sat on the right so not to miss The Lady. I had a flash of being five saying to my grandmother, “But Gramma, what if she’s not home…what if she went someplace.”

And my Grandmother shaking her rosary saying, “Susilina, dunt’a worry, the Signora, she’a always home….she’a wave when we go by.” 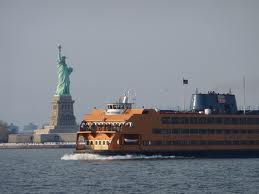 There’s never a time I see The Statue of Liberty that she doesn’t produce a lump in my throat, because she is always home, watching over the harbor, greeting its guests as we’re brought to and fro.

I remember worrying for her safety on September 11th knowing she witnessed everything and how our enemies might target her and what she stands for:

When Frederic Auguste Barholdi designed her after she was given to us as a gift from the French commemorating the alliance of France and the U.S. during the American Revolution, he did so symbolically. Every part of Lady Liberty represents a higher cause.

The torch is the strongest symbol that Bartholdi incorporated into the Statue. In fact the Statue’s real name reflects its true meaning: Liberty Enlightening the World.

She wears a crown with seven spikes representing the 7 seas and 7 continents of the world, re-enforcing the universal concept of liberty along with her 25 windows for the heaven’s rays of light that shine over them.

The tablet she holds in her left hand is a book of law based on the founding principles of this nation, a nation based on law.

The script on it was one of the last changes that Bartholdi made to the Statue originally left blank. He placed the date of America’s independence on it (JULY IV MDCCLXXVI ) in roman numerals which are also symbolic of law.

The shape of the tablet, or stone, in architecture is called the keystone which keeps the other stones together. Without it everything would fall apart. The keystone of this nation is the fact that it is based on law. Without it,  freedom and democracy would not reign.

The Statue of Liberty wears sandals. She’s also not standing still. Even though she stands on a pedestal, she is actually walking ahead moving forward lighting the path to freedom through peace, not violence. Her footwear also suggests her stature as a free person. (Camille said, too bad they weren’t Manolos).

Lib’s robe, or stola, is free-flowing which refers to the Roman influence of the goddess “Libertas,” which was worshiped by freed slaves.

The broken chains located at her feet symbolize the freedom that Lady Liberty is demonstrating that she’s forever free from slavery and bondage.

I think of these things as the ferry sweeps by her.

The other slice of lore that comes to mind, speaking of the pedestal, are the 120,000 people of New York City, mostly immigrants, who paid for it giving less than a dollar. Our deal with France was we’d erect it on our dime, but Grover Cleveland, president at the time, refused to ask Congress for the funds to do so.

Joseph Pulitzer, another recent blog hero (Could You Keep It Down), placed an ad in his well read newspaper saying, anyone giving as little as a penny towards the Lady’s pedestal will have their name printed in the The New York World.  Joe’s campaign was a big success because Lady Liberty, after shamefully sitting in crates for months, finally was unveiled on October 28, 1886 to a crowd of proud New Yorkers.

The other thing I got to see in my lateness that moved me was a young black couple who came up on the deck hand in hand. One was a little ahead of the other because he couldn’t wait to see The Lady.

They sat cozily on the bench where the excited one put his head in the others lap while his partner gently stroked his forehead. They couldn’t have been more than twenty, their ebony skin shining with love and inspiration.

The affection along with patriotism brought my own heart front and center.

At the end of the day when a girl offered to drive me home, something I’d normally jump at, I said without pause, no thanks, and got back on the boat.

It was dusk, so Lib had her lights on as she waved me back across the deep green harbor because like my grandmother said…

From my most favorite poem… 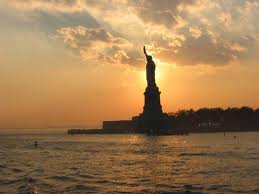 I'm just a girl who likes to write slightly on slant. I've had a career in fashion, dabbled in film and to be honest, I don't like talking about myself. Now my posts are another matter so I will let them speak for themselves. My eBooks, A New York Diary, Model Behavior: Friends For Life and Notes From A Working Cat can be found on Amazon.com. Thanks.
View all posts by Susannah Bianchi →
This entry was posted in Beauty, Family, friendship, Gratitude, History, humor, Love, New York City, Uncategorized, writing and tagged fashion models, grandparents, love of history, September 11th 2001, Staten Island Ferry, The Statue of Liberty. Bookmark the permalink.

17 Responses to When Late Is Great