Books Are For Reading

I just cleaned off my bookshelf that got me thinking of an incident way back when involving my step-father, a serious book collector.

He had them floor to ceiling in cases specially built. I still think the main reason he married my mother, other than her cooking, 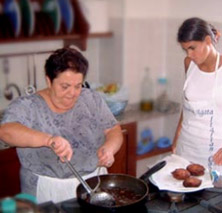 (she’d kill me if she saw this and no, that’s not her) was because she was the only woman on the planet who would dust them all.

One time visiting, I asked George (when a man becomes your step-father in your thirties, calling him daddy is hardly an option) if I could borrow a Sherlock Holmes mystery.

He looked at my mother and they both began to laugh.

“What’s so funny?” I said, looking to see if the candy store was open, an expression my grandmother used if your fly was down.

My mother, the first to recover said, “Are you kidding Susannah…do you really think we’d lend you a first edition?”(now they were hers too…she who only read the Daily News)

I remember feeling a little embarrassed as if I overstepped my bounds, but after rational thinking realized they were the freaks, not me.

Books should be read, doesn’t matter how old or valuable they are…unless of course age and air would disintegrate them, and that’s another matter entirely.

But the fact they felt it was more important to exhibit them like hardcover knickknacks than to share their contents dropped their stock, not too high to begin with.

To George’s credit, he went out and bought me the complete Sir Arthur Conran Doyle’s Sherlock Holmes Collection in paperback with print so tiny, even with perfect eyesight, I couldn’t read…all because he couldn’t bring himself to lend me one of his.

It ended up being donated to a prison upstate.

In my own defense, I’m more than responsible returning whatever I borrow in mint condition. I wasn’t even allowed to read it in their house.

Makes me think of Thomas Jefferson who, to replace all the books lost when the British burned the United States Capitol in 1812, sold his extensive library for 23, 950 dollars that became the second Library of Congress, much more lavish than the first. I have visions of Tom kissing each tome, since he sold out for financial reasons, as you would a friend you’ll more than likely never see again.

Thoughts piggyback one another until you find yourself, in this case, perusing your own bank of books, opening each one lingering over a paragraph thinking…I bet Ed would like this…or Evelyn…or Ella and maybe I’ll just read this again…pulling them out, stacking them by the bed or on the hassock, once belonging to Evelyn’s mom, I use as a side table.

My mother and step-dad are both long gone, and I know wherever she landed, she couldn’t care less. But George so loved to read, even if it were only titles preening from a shelf bound in paper and leather, so I hope there’s a library where he is so his soul can read AND LEND, not just admire, well into eternity.

I'm just a girl who likes to write slightly on slant. I've had a career in fashion, dabbled in film and to be honest, I don't like talking about myself. Now my posts are another matter so I will let them speak for themselves. My eBooks, A New York Diary, Model Behavior: Friends For Life and Notes From A Working Cat can be found on Amazon.com. Thanks.
View all posts by Susannah Bianchi →
This entry was posted in Books, Family, Home, humor, Uncategorized, writing and tagged lending books, Library of Congress, reading, Sherlock Holmes, stingy parents, Thomas Jefferson. Bookmark the permalink.

14 Responses to Books Are For Reading