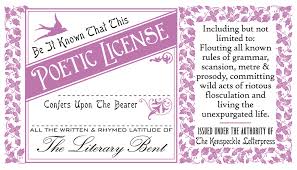 My friend David Stewart, a great writer (https://greenwalledtower.wordpress.com/), suggested this as a theme I’ve been moodily mulling over.  It was because lately I’ve been getting some bewildering comments that have made me take pause.

Let’s begin with basics…its meaning – Poetic License – a noun…
the freedom to depart from the facts of a matter or from the conventional rules of language when speaking or writing in order to create an effect : he used a little poetic license to embroider a good tale.  In other words…IN YOUR OWN WORDS…IN YOUR OWN VOICE.

It’s what separates you from the herd.

To be clear, I am not comparing myself to any of these amazing authors, but would you ever mistake David Sedaris or Anne Lamott, Stephen King or Jane Austen for anyone else?

The answer is no, because of their particular way of expressing themselves which is why you read them in the first place…for their matchless style.

The first comment that stuck in my craw was one concerning Bill Hicks.  It was in my essay Last Call, when I was lamenting about drinking.  I had said, he started from the womb, my way of saying, Bill was young.  I got bitch slapped for this and to be honest, it made me sad that anyone would think I would desecrate him in any manner.

Then we had my usage of the term fuck I feel should be added to the English language as a legitimate word, one I use all the time.  Why?  It cuts to the quick…spare, understood.  It takes-no-prisoners if you will.  Why does it tend to offend when it alleviates so much pressure?  Wasn’t the first time this came up.  In my essay, A Word Like No Other, way back in August 2011, a fellow, I never heard from before or since, took me to task.

This brings me to candor, one of the hardest things to pull off in any type of prose.  Nora Ephron said, most fiction is non-fiction, like in her novel Heartburn about when her husband fell in love with someone else.  Yes, she disguised the particulars, but her heart was at the helm draining its hurt nonetheless.

To dig deep is a writer’s biggest challenge, so when a reader becomes censorious, it manifests as mystifying to have to put her tail between her legs for bravely being honest.

My question to whomever the shoe may fit?  What makes you feel so uncomfortable?  It’s usually something pressing a button that may need to be fleshed out to enable more freedom of self.  I could lecture on this.  Why a word or phrase takes you out to the ballgame belting emotional grand slams not caring what or who you hit.  Believe me, it’s worth a mental perusal.

When you get to the bottom of it, it’s like loosening your belt.

One last point.  There are so many blogs to choose from so if mine doesn’t sit well, that’s okay.  Spend your time somewhere that illuminates instead of dulls, lights rather than dims.  I say this well.

The internet has so much, almost too much, to offer so no one needs to settle for something that feels wrong or peculiar.

We writers aspire to inspire, not offend or irk, miff or piss-off.

Writing is like white water rafting – we do it to feel the wind in our hair.

I'm just a girl who likes to write slightly on slant. I've had a career in fashion, dabbled in film and to be honest, I don't like talking about myself. Now my posts are another matter so I will let them speak for themselves. My eBooks, A New York Diary, Model Behavior: Friends For Life and Notes From A Working Cat can be found on Amazon.com. Thanks.
View all posts by Susannah Bianchi →
This entry was posted in Books, readng, words, writing and tagged Anne Lamott, brutal honesty, David Sedaris, https://athingirl.com/2011/08/22/a-word-like-no-other, https://greenwalledtower.wordpress.com/, love of language, Nora Ephron. Bookmark the permalink.