Give Me Your Tired Your Poor And Your .223 Caliber Smith and Wesson M-15s

Posted on December 11, 2015 by Susannah Bianchi

My essay, Is Terrorism Becoming The Norm, caused quite a stir.  After writing over 1200 blog pieces none have ever gleaned as many comments.

Some came in peace and some heavily armed.  It’s America after all so I try not sparing  with the First Amendment, but towards the end became so turned-off by one particular contributor that his last tirade went into the cyber shredder.

I’ve been reading Donald Trump’s take on the whole thing mainly because his garishness fascinates me.  After meeting him more than once, can only describe the Donald as a badly cut diamond passing himself off as a Cartier.

He thinks we should seal our borders banning all Muslims, and I certainly get it.  When you consider how many we’ve welcomed who hate us so passionately it more than makes sense.

But then Liberty comes knocking like a close relative no longer invited to your table.  Do we banish her after being so faithful and vigilant arms outstretched to those seeking a better life?  Should she be retired, moved to an assisted living community where she can watch CNN while reminiscing about the good old days when FREEDOM RANG? 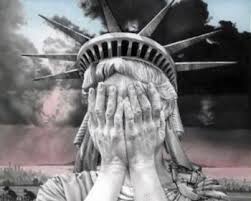 Maybe Ellis Island, one of the more moving sites in America, should be turned into a theme park rather than a place of sacred reflection.

And who’s going to Monticello to break the news to Thomas Jefferson, or Mount Vernon where The Father of Our Country lies.  They both would be at rest no more to see what they achieved was no longer.

That’s not to say, we don’t have a problem.  These random, barbaric shootings stealing our sense of safety are not to be ignored, but to change who we are as a people, is that the answer?

I really don’t know.  What I do know is, it feels just plain wrong buying more guns.

I’ve always been disappointed in FDR for not helping the Jews more during the Holocaust, pleading ignorance.  It wasn’t till Pearl Harbor did we finally make a much needed appearance.

Hitler and his followers were pretty scary, but they didn’t hide their faces wrapped in religious gauze not valuing their lives.  With all the ghastly crimes they committed, they weren’t blowing themselves up at the drop of a hijab (Muslim headscarf meaning cover).

We knew who they were unlike ISIS and its worshipers who live in regular homes with kitchens and dens just like the rest of us.  They nod to their neighbors, buy flowers and milk, never once letting on their hatred for all we stand for.

Life, Liberty and the Pursuit of Happiness.

Why would Allah be against that…wouldn’t he want his children to be happy too?

Where is Pollyanna going with all this?

I have no answers.  What I do know is, becoming a hawk, hiding in dove’s clothing so I can mow them down in kind, sure doesn’t feel right.

Give me your tired, your poor, so I can blow you to smithereens.

With silent lips. “Give me your tired, your poor,

The wretched refuse of your teeming shore.

Send these, the homeless, tempest-tost to me,

I lift my lamp beside the golden door!”

Inscription on the base of The Statue of Liberty from Emma Lazarus’s poem, The New Colossus. 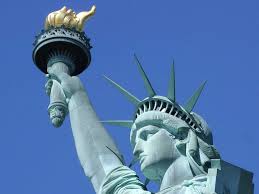 Atta girl Lib.  You give us that Power Salute because we sure need to see it.

I'm just a girl who likes to write slightly on slant. I've had a career in fashion, dabbled in film and to be honest, I don't like talking about myself. Now my posts are another matter so I will let them speak for themselves. My eBooks, A New York Diary, Model Behavior: Friends For Life and Notes From A Working Cat can be found on Amazon.com. Thanks.
View all posts by Susannah Bianchi →
This entry was posted in Faith, History, Home, media, New York City, Politics, religion, words, writing and tagged Donald Trump views on terrorism, gun control, https://athingirl.com/2015/12/03/is-terrorism-becoming-the-norm/, Shooting San Bernardino California, The Founders, The Statue of Liberty. Bookmark the permalink.

32 Responses to Give Me Your Tired Your Poor And Your .223 Caliber Smith and Wesson M-15s