Posted on December 16, 2015 by Susannah Bianchi

The late, great Bill Hicks would have been 54 years-old today.  Can’t believe he’s been gone 21 years.

I always try to write something I remember about him to share, since like Elvis, he’s more popular than ever.  You mention his name and people practically bow in reverence.

One of the things we did together was swap favorite films.  We’d go to Blockbuster Video and each choose one we’d think the other would like, his idea of a fun afternoon…and it was.

Innocence comes to mind, so happy with one another between a big bowl of popcorn.

I came up with The Night Porter he said, scared the shit out of him, and Orphans with Albert Finney.  We both came together on The Lion In Winter immersed in its language.

Henry II:  I could peel you like a pear, and God himself would call it justice.

I could have conquered England – all of it – but I had women in my life.

Prince Geoffrey:  my, you chivalrous fool, as if the way one fell mattered.

Prince Richard:  when the fall is all there is, it matters.

Bill was a paradox alright – complex yet childlike in all he loved to do.

I think of him when in my depths often calling out, calm suddenly joining me in the room. 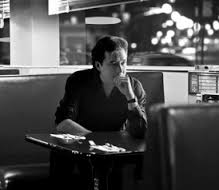 “Don’t worry, don’t be afraid, ever, because this is just a ride.”

I'm just a girl who likes to write slightly on slant. I've had a career in fashion, dabbled in film and to be honest, I don't like talking about myself. Now my posts are another matter so I will let them speak for themselves. My eBooks, A New York Diary, Model Behavior: Friends For Life and Notes From A Working Cat can be found on Amazon.com. Thanks.
View all posts by Susannah Bianchi →
This entry was posted in Cinema, friendship, Gratitude, humor, Love, media, men, Women and men, words and tagged Bill Hick's 54th birthday, Bill Hicks, Bill Hicks 12/16/61-2/26/94, Great films, remembering a loved one, The Lion in Winter. Bookmark the permalink.