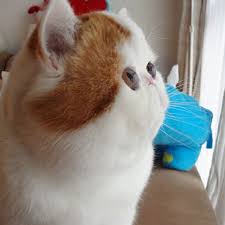 There’s a cat the size of a seal in Petco flirting his wares.  His name is Snowdon, and he’s all white except for some tan around his ears.  He looks like a large Chanel spectator pump.  Against my better judgment, I keep going in to see him so we can hold hands, well paws, through his cage.  Now I know what it’s like visiting your beloved in prison.

He’s so handsome, and it’s no secret I’d love a new, furry pal, but he looks like he’d wreck the place with his claws alone.  That’s what really stops me.  Not even the 200 bucks plus provisions I’d need to adopt him.   My new apartment at the moment, is very pristine.  And my friend who’s a decorator, is giving me lovely things like a Ralph Lauren white Damask couch and grass rugs coming any minute straight from the Bahamas.  I’ve never had such pretty things.  And though a friend I’ve consulted suggested the dreaded D word…DECLAW…I could not emasculate a man, four-legged or otherwise even smelling like tuna, in such a brutal way.  This decision, Snowdon and I maturely discussed, brought us closer.

I’m dying to run round the corner with my Am-Ex already on life support, to say…so ya wanna come live with me Lord Snowdon?

But then I look around and think…hmm…do I really want a man this size in my bed?  I kinda do, but still hesitate, when I remember what it’s like after the honeymoon is over.  You’re picking up his poop in a Black and Decker crane five times a day while he lies naked shedding on your new, unpaid, bed.  He’s demanding…waking you up no matter what time it is, and when you want to canoodle, he’s sawing wood unable to get anything up except perhaps his appetite.

Is this really what you want Susannah?

Thin girl’s on the fence.

I'm just a girl who likes to write slightly on slant. I've had a career in fashion, dabbled in film and to be honest, I don't like talking about myself. Now my posts are another matter so I will let them speak for themselves. My eBooks, A New York Diary, Model Behavior: Friends For Life and Notes From A Working Cat can be found on Amazon.com. Thanks.
View all posts by Susannah Bianchi →
This entry was posted in animals, Uncategorized. Bookmark the permalink.

32 Responses to Cattin Around