Audrey’s In The House

Posted on February 9, 2016 by Susannah Bianchi

I’m not much into decorating as a rule, but suddenly I’m rivaling Martha Stewart.

I already have lots of artwork for my many walls.  Never being able to afford a masterpiece, I’d find a cheap, old magazine cover, poster or photograph then frame it lavishly.

It’s all about the packaging.

So…my bedroom is more or less at its fighting weight…done…a fait accompli, but needing a little salt and pepper, as my pal Camille would say.

I  already have two great pictures of Audrey Hepburn.  A Town and Country cover, 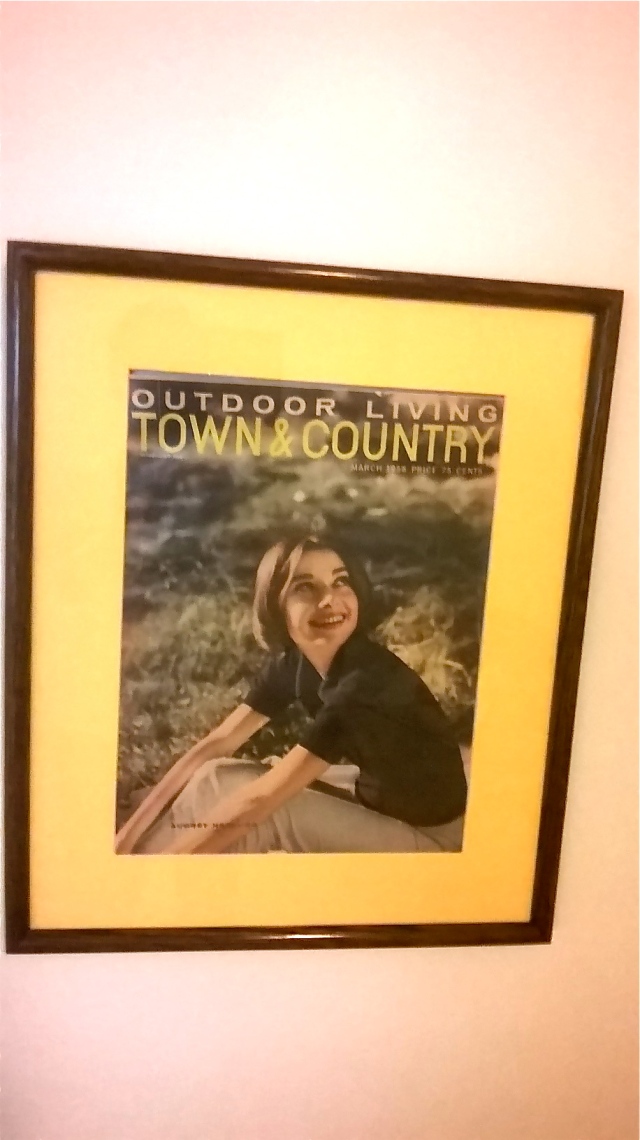 and one from Life Magazine

that raise the bar, I so wish was open, considerably.

But, can you really have too much Audrey?

It’s amazing what you find online when you do a search.  Funny Face, a musical, is one of my favorite Audrey films when she’s practically drugged to Paris to model for Fred Astaire whose character is loosely based on fashion icon Richard Avedon, who actually was a consultant on the film.  It’s kitschy and silly,  breathtakingly beautiful making you want to don a beret and hop the next plane to Paree.

I decided my Amish bedroom needed a sprinkle of our girl.

The 8 by 10 print, with tax, came to less than 5 bucks.  The framing?  Well, that’s another story even with my best Monty Hall, Let’s Make a Deal, persona I only haul out on special occasions.  Offering cash always helps.

So, once again packaging had the last say.

I'm just a girl who likes to write slightly on slant. I've had a career in fashion, dabbled in film and to be honest, I don't like talking about myself. Now my posts are another matter so I will let them speak for themselves. My eBooks, A New York Diary, Model Behavior: Friends For Life and Notes From A Working Cat can be found on Amazon.com. Thanks.
View all posts by Susannah Bianchi →
This entry was posted in Beauty, Books, Cinema, Fashion, Home, humor, modeling, Uncategorized and tagged Audrey Hepburn, Funny Face the film, home decorating, Martha Stewart Living, picture framing, two. Bookmark the permalink.

20 Responses to Audrey’s In The House