Babies, Back To One

I recently worked with a set of little girl triplets that set my heart on fire. 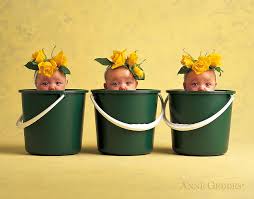 I didn’t see them come in, with their minute Irish mom they were the spitting image of, trailed by two doting nannies.

There I was by the coffee machine, when a face the size of a grapefruit popped out through a curtain.  I jumped, which made her laugh as if I were a rodeo clown.  A second later, I see a foot in a black patent leather shoe, then another, then another, shoot out, like multiple cannons.

When they appeared in identical white smocks, sweaters tied round their necks resembling short tennis players, I couldn’t get over there were three, all about to make their film debut.

It pays a production to get twins, or in this case, triplets, if one has a meltdown, which as you can imagine, is quite often the norm.  Hey, they’re babies…fuck show-biz…we want a full boob, thank you very much, and a nice, long burp.

But parents dream of their kids being the next Gerber Baby, so they do what they can to make that happen.  These three, with or without their mini Mary Janes, were surely shoe-ins, pun intended.

When they got to set, they gurgled and grinned, and all went well until…one of them just had had enough.  A guy playing a dad, who looked about 12, had one in each arm, and the third, hooked in a harness that made her look as if she was about to skydive.  She took it well, but triplet on his right did not.  Frankly, I think she was pissed being upstaged by her sister. Think Olivia de Havilland and Joan Fontaine fighting over billing.

“Where’s my agent…is he here?” 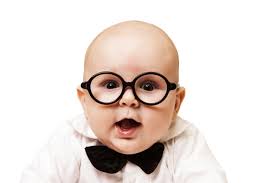 He was, but unavailable, apparently locked inside the men’s room.  Hey, everyone knows to stay the fuck away from the guacamole.

She then screamed for her mom who was trying to stay in the shadows, but had to come get her when she went for the dad’s hair.

Like any diva, she had demands.  Picture a baby Lana Turner in a fat Pamper needing major pampering.

Took everything I had not to rush over to assist, wanting to quell the noise, and just, hold a big baby.

They kept putting her back in dad’s arms as she kept screaming…I WANT A NEW CO-STAR…NOW!

Who knows…maybe she had a point.  He was a lot taller, and actors are known for cast approval, often written into their contract.

After a quick conference with her sisters that I gather didn’t go too well, she howled till she was taken to her trailer.

I was back at the coffee machine when they made their exit dressed in chic jean jackets, apparently, gifts from Gap for a recent ad they did.

Perks of the trade.

As they left smiling and waving like miniature movie stars, I thought, this is just the beginning.  I see their name up in lights, three famous baked potatoes,  just hoping mom saves all that money for their college education. 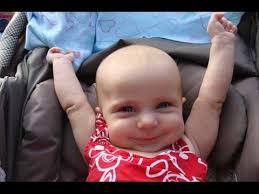 I'm just a girl who likes to write slightly on slant. I've had a career in fashion, dabbled in film and to be honest, I don't like talking about myself. Now my posts are another matter so I will let them speak for themselves. My eBooks, A New York Diary, Model Behavior: Friends For Life and Notes From A Working Cat can be found on Amazon.com. Thanks.
View all posts by Susannah Bianchi →
This entry was posted in Family, Fashion, humor, Love, parents and tagged Anne Geddes photography, babies, child stars, triplets. Bookmark the permalink.

16 Responses to Babies, Back To One