Phone Survey…or…Life In a Cell 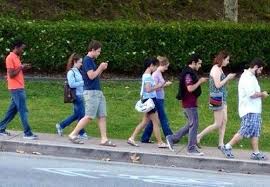 I counted 17 people waiting for the crosstown bus, all on their phones, either talking, texting or emailing.  It could have easily been an Apple commercial, waiting for an obscure actor to waltz through pitching iPhone ACDC,or whatever they have warming up in their overpriced bullpen.

I am so perplexed over our acute cyberness.  No, that’s not a word, but it should be.

I recently watched, The PBS version of Pride and Prejudice with Colin Firth…sigh…and back then, everyone read, played cards, took strolls. The women sewed and played piano, the men hunted, drank brandy while tastefully admiring them.

There was something so simple and serene about it all.  I just can’t imagine Mr. Darcy texting his staff at Pemberley to expect him in a fortnight come thither, with guests on horseback…please shoot 6 quail, one dozen ducks and a cow in preparation for our imminent arrival.  🙂  I don’t think, to put it in Austenese, he’d be the least bit diverted by cyber life.  Wonder what he’d think of Cosco and Fresh Direct…imagine, game in bulk.

Social media has stolen intimacy as far as I’m concerned.  Just because you can text and sext any hour of the day or night doesn’t make life cozy.  Lonelier and isolated is more like it.  Don’t you want to feel the person you’re exchanging those murmurings with?  Yeah, I know, you can secretly weigh a thousand pounds and flirt in a Muumuu, but how satisfying is that?

Who said it’s better than nothing?

All I know is, my friend Tabby was having a cyber fling with Felipe, claiming to be a renowned chef cooking for her online every night. She was so smitten, she’d even dress in something slinky she’d slip off after dessert. Turned out he was exaggerating, just a tad.  He finally, after taking Jesus Christ as his personal Savior, admitted he was a cook at a penitentiary in love with an inmate named Arizona Phil or Mississippi Bob, I can’t remember which, and no, I haven’t started writing fiction.

Tabby, so turned off by those fancy, phony menus, has been eating rice and beans ever since, washing it down with numerous martinis.

The lesson to be learned?  Get the fuck off the phone.  Read instead, it’s emotionally safer.

I'm just a girl who likes to write slightly on slant. I've had a career in fashion, dabbled in film and to be honest, I don't like talking about myself. Now my posts are another matter so I will let them speak for themselves. My eBooks, A New York Diary, Model Behavior: Friends For Life and Notes From A Working Cat can be found on Amazon.com. Thanks.
View all posts by Susannah Bianchi →
This entry was posted in alcohol, Books, food, humor, men, New York City, readng, religion, sex, sexual relationships, Women and men, words, writing and tagged Jane Austen, Online dating, sexting, The Apple Store, The Internet. Bookmark the permalink.

14 Responses to Phone Survey…or…Life In a Cell