Who Will Be Our Next President?

Soon it will be over, the long, desperate drumroll will finally cease.

Who will it be…Bonnie or Clyde?

How bout, we just toss a coin since either way Washington’s bones will rattle.

George, by the way, didn’t even want to be president.  He was asked to be, reluctantly leaving his beloved Mount Vernon to lead, best he knew how, enveloped in honor and humility.

I can’t imagine him tearing apart anyone in a debate, or Tweeting nonsense, or sending secret emails.  And if Martha fooled around with some minuteman, you can bet there would have been hell to pay.

When George was at the helm, our country came first, the reason he stepped up in the first place.

Despite the advanced age in which we live, that should still be the case.  I’m tired of our candidate’s egos sparring in the ring.

Sick of the tabloids lurking like hawks waiting for the next indiscretion to drop.

I’m waiting for Hillary to have a heart attack, from all the stress, and Trump to implode from being such a colossal asshole.

When George stepped down he recommended John Adams, who then put forth Jefferson, succeeded by Madison, Monroe then Andrew Jackson who, if were here, would simply shoot both candidates.

Even Andrew, with his collection of war crimes, would be more fit to lead.

Where am I going with this?  To my voting booth on November 8th to toss my coin.

Then it will be over.  The drumroll, finally, will have ceased. 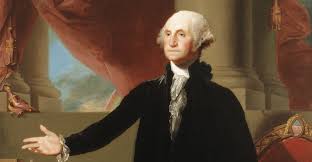 I'm just a girl who likes to write slightly on slant. I've had a career in fashion, dabbled in film and to be honest, I don't like talking about myself. Now my posts are another matter so I will let them speak for themselves. My eBooks, A New York Diary, Model Behavior: Friends For Life and Notes From A Working Cat can be found on Amazon.com. Thanks.
View all posts by Susannah Bianchi →
This entry was posted in History, humor, Politics, war, Women and men and tagged 2016 Presidential Election, Donald Trump, Hillary Clinton, Revolutionary War, Voting. Bookmark the permalink.

24 Responses to Who Will Be Our Next President?