I was sitting at a little cafe in midtown when a well-dressed woman, two stools down, looked up from her phone and said, “What does hirsute mean?”

“Hairy,” I said, without thought or pause, a word that always makes me think of Mr. Detuzzi, the father of Debbie and Janet, two childhood friends.

I couldn’t have been more than 8 when I came home and said to my mother, “Ma, Janet and Debbie’s dad…he’s so hairy…he looks like a bear.”

“He’s hirsute,” she said, which is why I never forgot it’s meaning.

Mr. Detuzzi would mow the lawn without his shirt, his back looking like a throw rug, strips of sweaty hair waving from beneath his arms.  He was a handsome man too, but did he need Nair, or a wax, in a big way.

“Some women like that,” said my mother. “It doesn’t particularly appeal to me, but…to each his own.”

Well, it must have clearly appealed to Mrs. Detuzzi, because if it were me, I’d be chasing him around the yard with a razor. “Come-ere honey, you need a trim, even more than the lawn.

Funny what triggers a memory. 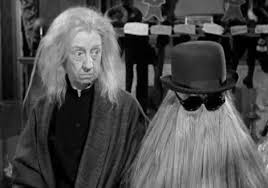 I'm just a girl who likes to write slightly on slant. I've had a career in fashion, dabbled in film and to be honest, I don't like talking about myself. Now my posts are another matter so I will let them speak for themselves. My eBooks, A New York Diary, Model Behavior: Friends For Life and Notes From A Working Cat can be found on Amazon.com. Thanks.
View all posts by Susannah Bianchi →
This entry was posted in animals, Connecticut, Family, humor, kids, Women and men, words and tagged a good vocabulary, childhood memories, Cousin It Addams Family, hairy men, to each his own. Bookmark the permalink.

8 Responses to A Hairy Story