Everyone In The Pool

Walking through the park on my way home, I spot a cardinal seeming to lead the way making me think of Robert Preston in The Music Man.

I watch as he rests on the railing, then a bench before settling on the bough of a tree.  As I glide by, he rises like a feathered gentleman escorting me on my right, as if keeping me out of harm’s way.

Suddenly he stops, diving into a water fountain, his red head now damp, his beak dipped for a nice long drink. 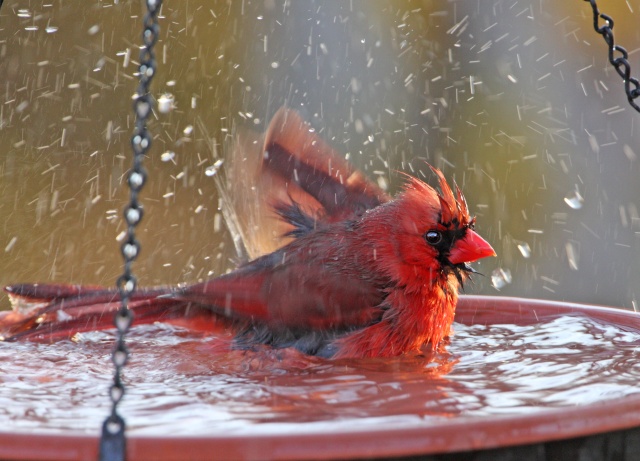 I stand and watch as he unabashedly bathes spreading his wings wetting them thoroughly.  To say I’m charmed doesn’t do my smile justice, as I’m now joined by a young woman and an Asian couple, the man making a video for the folks back home.

I long to sneak in to provide more water knowing, he’ll more than likely fly away, when a little girl toddles over barefoot in a sunsuit and does just that, holding the button causing a spray to appear like a sudden spring shower.

Mr. Cardinal, undaunted, stays put happy as can be, as I say to the Asian man, “Do you think you could send your little film to me?”

He laughs, says something to his wife in what appears to be Japanese, and I realize, he speaks no English.

I'm just a girl who likes to write slightly on slant. I've had a career in fashion, dabbled in film and to be honest, I don't like talking about myself. Now my posts are another matter so I will let them speak for themselves. My eBooks, A New York Diary, Model Behavior: Friends For Life and Notes From A Working Cat can be found on Amazon.com. Thanks.
View all posts by Susannah Bianchi →
This entry was posted in animals, Beauty, grace, humanity, humor, kids, nature, New York City and tagged Birds of Central Park, Broadway Musicals, cardinals, Mother nature, Paying attention to nature. Bookmark the permalink.

20 Responses to Everyone In The Pool