Posted on August 6, 2017 by Susannah Bianchi

I picked up a book called, First Families (2005), by Bonnie Angelo, that’s filled with fascinating facts of the men, along with their wives and children, who’ve lived at 1600 Pennsylvania Avenue.

I loved knowing Teddy Roosevelt, my favorite president, coined the name, The White House formerly called, The President’s House after inscribing it on his personal stationary while his successor, William Howard Taft, created the Oval Office.

Teddy then added the West Wing, since his family of 8 was bursting at the seams, and built the first White House tennis courts after bullying a stingy Congress to pay for them…an evangelist of exercise, Angelo called him, and he was,

running and boxing with his four boys across the South Lawn.

cleat marks on the parquet floor of the Oval Office that are still there, and had squirrels relocated to Rock Creek Park who buried nuts on his pristine putting green.

Then we have White House pets. The Clinton’s cat Socks, and dog Buddy, receiving more than 35 thousand letters and emails.

The Coolidge family’s raccoon, Rebecca, who had the run of the house.

Caroline Kennedy’s pony, Macaroni, making daily visits to the Oval, and Laura Bush’s Barney, a Scottish terrier she called, the son she never had.

Mustn’t forget FDR’s beloved Fala, another Scottish terrier, he was rarely without,

who’s buried near him in the rose garden beneath the sundial at Springwood in Hyde Park.

But my favorite pet tale is when Quentin Roosevelt, Teddy’s youngest, decided when his brother Archie was in bed with measles, to bring Algonquin, his pony, to visit,     squeezing him into the White House elevator thinking he would surely cheer Archie up, a wild success. 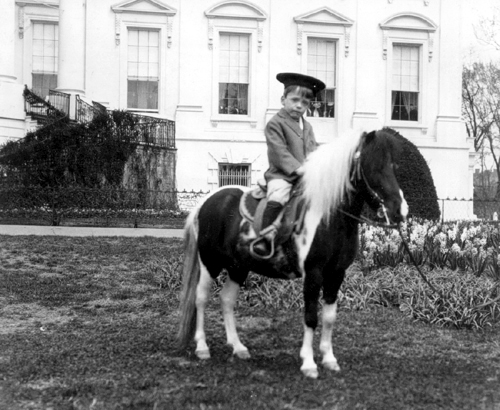 Franklin and Eleanor Roosevelt entertained 323 houseguests in one year, having to absorb the cost since, you’re charged for every unofficial meal (something that threw Nancy Reagan) as well as being responsible for your dry cleaning bill along with buying one’s own toothpaste.

In other words, presidential occupancy isn’t totally funded by our tax dollars.

I’d have loved to have seen the Kennedy’s dry cleaning bill since JFK changed suits three to four times a day, and Jackie as we know, was a fashion femme fatale.

I’ll bet it was worth framing. 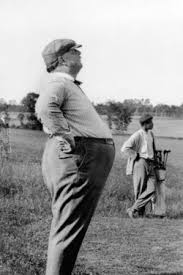 had a special bathtub made since he allegedly got stuck in the old one.  It was huge, large enough to hold four working men sitting down. Poor Will, who behind his wife, Nellie’s, back snuck desserts like a naughty boy, who would then toss out the very first baseball.

Julia, U.S. Grant’s Missus, tried her best to stay in their home very close by only using the executive mansion for state affairs, but Congress said NO…all First Families live at the President’s House, that she eventually grew to love saying, the eight years they lived there were her happiest.

Ida McKinley hung horseshoes in her bedroom for luck.

Nancy Reagan also had them, but wasn’t considered as nuts as Mary. A matter of opinion.

I could go on and on. 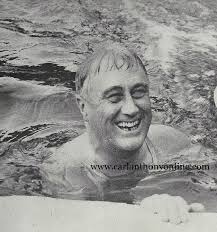 History’s really something, isn’t it?

I'm just a girl who likes to write slightly on slant. I've had a career in fashion, dabbled in film and to be honest, I don't like talking about myself. Now my posts are another matter so I will let them speak for themselves. My eBooks, A New York Diary, Model Behavior: Friends For Life and Notes From A Working Cat can be found on Amazon.com. Thanks.
View all posts by Susannah Bianchi →
This entry was posted in animals, Books, Family, Fashion, food, History, Home, humor, kids, media, parents, Politics, readng, writing and tagged First Families Bonnie Angelo, Google Images, U.S. Presidents, White House History. Bookmark the permalink.