Posted on February 4, 2018 by Susannah Bianchi

When I can’t sleep, instead of sheep, I count the presidents, making certain to remember all 45 of them.

I toss in trivia like, Lincoln was the tallest at 6’4, while James Madison, the shortest at 5’4 weighing only 100 pounds, where William Howard Taft weighed in at 300, and the only other president, besides JFK, to be buried at Arlington.

But my favorite president, next to Teddy, was our 6th…John Quincy Adams, son of John Adams, our 2nd. I even have a stuffed lion named after him.

What I loved most about John Quincy was his inherent integrity, how he never backed down, especially fighting against slavery...speaking his mind and his conscience, to quote the writer/historian, David McCullough.

“Always vote for principle, though you may vote alone.” JQA

I liked knowing he was romantic as well, penning verse to his wife, Louisa, when they were often apart, laced with a touch of lust.

He was also the only president to ever return to the House of Representatives, pairing humility with his integrity earning him the name, Old Man Eloquent.

He said, it was the happiest 17 years of his life.

In, 1848, at the age of 80, John Quincy collapsed at his desk. If you go on a tour of the United States Capitol, in Statuary Hall, a brass plate in the floor marks the spot. He was carried to the speaker’s office where he died, two days later while Henry Clay, in tears, held his hand.

He died in harness, as they said back then…with his boots on, as we say now.

Knowing our history emboldens us, making us proud to be Americans and much less fearful of the future, regardless, of who’s at the helm. 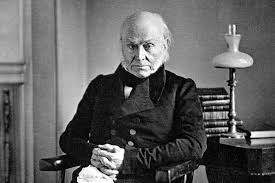 JQA was the very first president to ever be photographed.

I'm just a girl who likes to write slightly on slant. I've had a career in fashion, dabbled in film and to be honest, I don't like talking about myself. Now my posts are another matter so I will let them speak for themselves. My eBooks, A New York Diary, Model Behavior: Friends For Life and Notes From A Working Cat can be found on Amazon.com. Thanks.
View all posts by Susannah Bianchi →
This entry was posted in Books, Faith, grace, History, humanity, Politics, writing and tagged David McCullough The American Spirit, John Quincy Adams, Ken Burns filmmaker, The House of Representatives, US Presidents. Bookmark the permalink.