Thomas Jefferson and John Adams, both died on July 4th, 1826.

They had been friends, foes, then friends again much of their adult lives.

Adams was the one who coaxed Jefferson into writing the Declaration of Independence insisting, he was the better writer of the two.

They weren’t religious men, Jefferson a deist, believing in a creator based on reason rather than the supernatural. He was a scientist after all, while Adams believed in Unitarianism, one God for all.  One could say, Tom was the more lighthearted of the two, a liberal in his day, while his pal, in comparison, was buttoned-up in his beliefs.

In other words, Tom could be the life of the party.

After both being president, what would they have to say to what’s going on today?

Jefferson would no doubt take it better, reminding us we’ve weathered worse and this too shall pass.

Adams, on the other hand, would be crunching Tums complaining to his wife Abigail, especially about the children being separated from their parents.

Abigail, the Hillary Clinton of her time, would remind him, she too was separated from her eldest son, John Quincy, that would shut John up pretty fast being the one who took him away from her.

“I was very stoic John, but broken-hearted.”

Who’s she kidding, Hillary, I mean Abigail, was tough as nails and pushed John Quincy to go, priming him for greatness, that we of course benefited from.

Speaking of Mrs. Adams, she was the one who brought about the reconciliation with Jefferson, launching a golden correspondence that can be read today, revealing in their twilight years, how life’s minutiae just doesn’t much matter at its end.

Adam’s last words were, Jefferson survives, even though unbeknownst to him, his friend had already taken flight.

No one was quite sure of Jefferson’s last words, but clearly his room was ready first, no surprise there. Maybe he’s at the Jefferson Hotel in D.C. named for him, and John, the Hay Adams, named for his great-grandson, Henry.

Happy Independence Day Tom and John, wherever you happen to be. 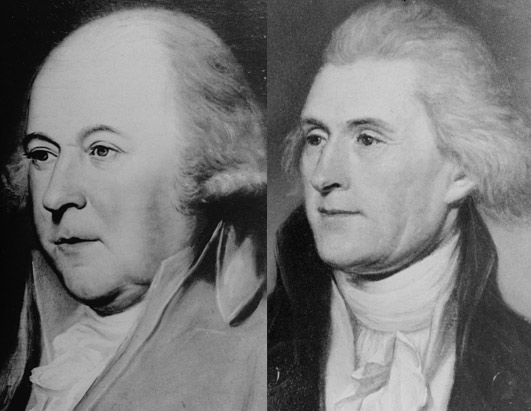 I'm just a girl who likes to write slightly on slant. I've had a career in fashion, dabbled in film and to be honest, I don't like talking about myself. Now my posts are another matter so I will let them speak for themselves. My eBooks, A New York Diary, Model Behavior: Friends For Life and Notes From A Working Cat can be found on Amazon.com. Thanks.
View all posts by Susannah Bianchi →
This entry was posted in Books, Faith, Family, friendship, grace, History, humanity, humor, kids, Love, media, parents, Politics, readng, words, writing and tagged American History, Donald Trump's Presidency, July 4 2018, Thomas Jefferson and John Adams dying the same day. Bookmark the permalink.