Once again, history came a callin’.

There I was coming back from Zitomer, the Cartier of drug stores, after purchasing my semi annual Clinque Chubbystick in Maraschino Red, when who do I come upon but a black, Scottish Terrier, a dead ringer for Fala, FDR’s famous pooch, splayed on the sidewalk refusing to budge.

His walker, a young lady in shorts made from a hankie, was trying to reason with him, but in Spanish, which could have been the problem since he didn’t seem all that bilingual to me.

I naturally stopped to say, “Well, he is a Scot after all, and you know how stubborn they are…his breed that is.”

Despite her texting and pointedly ignoring me, I tell her how our 32nd president had one just like Boris, her Scottie, his name emblazoned on his collar, who’s buried right alongside him at his presidential library in Hyde Park. 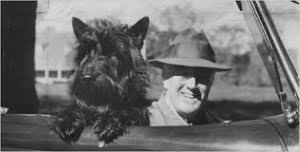 Did you just yawn?

Looking at me like I had two heads, I tell her anyway about FDR’s famous, what’s become known as, The Fala speech, he gave when he was accused of sending a navy destroyer to the Aleutian Islands after accidentally leaving Fala behind on the nation’s nickel.

Let me say, he would have left Eleanor faster than that little Scottie of his, so he and his legendary humor, on September 23rd, 1944, addressed his accusers bringing down the house, as it were.

These Republican leaders have not been content with attacks on me, or my wife, or on my sons. No, not content with that, they now include my little dog, Fala. Well, of course, I don’t resent attacks, and my family don’t resent attacks, but Fala does resent them. You know, Fala is Scotch, and being a Scottie, as soon as he learned that the Republican fiction writers in Congress and out had concocted a story that I’d left him behind on an Aleutian island and had sent a destroyer back to find him—- at a cost to the taxpayers of two or three, or eight or twenty million dollars—- his Scotch soul was furious. He has not been the same dog since. I am accustomed to hearing malicious falsehoods about myself … But I think I have a right to resent, to object, to libelous statements about my dog.

Of course I told Boris’s walker the SB version, that’s shorter with fun hand gestures, stumped why her expression never changed, but when done, I could have sworn Boris grinned and clapped his paws.

In any event, it got him up and going.

Sometimes all a guy needs is a good tail told well, by a girl with very red lips, up on her history.

Fala died in 1952, at the age of 12, buried beneath the sundial at Springwood, Franklin Delano Roosevelt’s childhood home, a few yards from his beloved master. 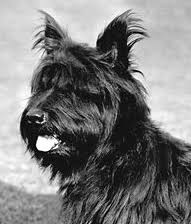 I'm just a girl who likes to write slightly on slant. I've had a career in fashion, dabbled in film and to be honest, I don't like talking about myself. Now my posts are another matter so I will let them speak for themselves. My eBooks, A New York Diary, Model Behavior: Friends For Life and Notes From A Working Cat can be found on Amazon.com. Thanks.
View all posts by Susannah Bianchi →
This entry was posted in animals, Family, History, humanity, humor, media, New York City, words, writing and tagged Clinque Chubbysticks, dog walkers, Fala FRD'S Scottish Terrier, Franklin Delano Roosevelt, The Fala Speech. Bookmark the permalink.