Most Poignant Story of the Week

I met a woman in the park with a Corgi. You don’t see many of what’s been coined the Queen’s dogs, since it’s not one of your more popular breeds.

They’re so funny looking they’re cute, with their large heads and long, fat bodies trottin’ on short, stubby legs. It’s as though they were constructed from spare parts. This one was so royally stubborn, you’d think it knew its heritage. 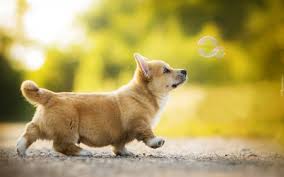 As I stretched on a bench, I listened to her beg, plead, bribe then finally yell to get him to resume walking.

“Of course,” she said, shaking her head, “who else would be this stubborn.”

“Try flattery. That usually works with a man.”

He yawned, before rolling on his back like he was working on his tan.

“Hmm…not to change the subject, but I just got through reading Queen Elizabeth had nine Corgis at one time. Nine, isn’t that amazing?”

“Not anymore,” said the woman. “The last one died not that long ago. Willow was his name. He was 15.”

Okay, here it comes, get out your hankies.

“No, actually she won’t be,” she said with a sigh. “You see, she loves them so, she doesn’t want any to outlive her, worried how they’d be without her.”

To say my heart curtsied would be an understatement. How sad and noble is that, knowing at her age that would more or less be the case (she’ll be 93 in April).

We both stood silently looking at the Corgi at hand when I said, “What’s his name by the way?

“Errol, on behalf of the Queen, I ask you to please get up.”

He picked up his oversized head looking at me as if to say, well, since you put that way, and believe it or not, did.

Even he was moved, so to speak.

God bless a true Queen of Hearts, and all those who love their animals, putting their needs first above their own.

I'm just a girl who likes to write slightly on slant. I've had a career in fashion, dabbled in film and to be honest, I don't like talking about myself. Now my posts are another matter so I will let them speak for themselves. My eBooks, A New York Diary, Model Behavior: Friends For Life and Notes From A Working Cat can be found on Amazon.com. Thanks.
View all posts by Susannah Bianchi →
This entry was posted in animals, Books, Faith, Family, friendship, grace, History, humanity, humor, Love, New York City, Women and men, words, writing and tagged A Royal Duty Paul Burell 2003, Central Park, kindness towards animals, Pembroke Welsh Corgi Dogs, Queen Elizabeth 11. Bookmark the permalink.

16 Responses to Most Poignant Story of the Week