It’s 6:30 A.M. as I cut across the Park, west to east to run the rest of the way home. I like this 5 minute stroll past the tennis courts since it’s a part of the city, changing at the speed of light, that never changes. I can even hear the bounce of tennis balls as early risers play before sunup.

There’s a middle-aged couple seated on a bench with three dogs: a Golden Retriever, a Maltese and a Miniature Poodle who’s getting brushed with what looks like a Mason Pearson hairbrush, the Tiffany of brushes. The other two stand side by side waiting patiently.

I stop and smile.

They smile back as the man vigorously works the snarls out of the Poodle who’s taking it all in stride.

The woman says, “They all like getting their hair done.”

I laugh and ask, “Are they women by any chance?” Suddenly seeing them in pink curlers 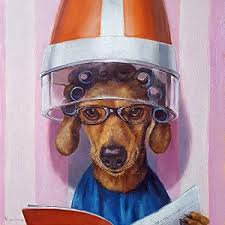 sitting under the dryer.

“All but him,” pointing to the Maltese, “and he likes it the best.”

I swear the dog nods and smiles, but then again I’m half asleep.

I look at the man making me flash to Warren Beatty in the film Shampoo and say, ‘Listen, I could use a wash and set too.”

The man, without missing a beat, nor brushstroke says, “So get in line.”

I'm just a girl who likes to write slightly on slant. I've had a career in fashion, dabbled in film and to be honest, I don't like talking about myself. Now my posts are another matter so I will let them speak for themselves. My eBooks, A New York Diary, Model Behavior: Friends For Life and Notes From A Working Cat can be found on Amazon.com. Thanks.
View all posts by Susannah Bianchi →
This entry was posted in animals, Beauty, Cinema, creative writing, Fashion, humanity, humor, New York City, words, writing and tagged Central Park Tennis Courts, dog owners, Finding the humor in everything, Getting your hair done, Shampoo Warren Beatty. Bookmark the permalink.

110 Responses to Another New York Story